On the one-hundredth anniversary of our journal Przegląd Archeologiczny

In 1919 the journal Przegląd Archeologiczny [Archaeological Review] appeared in Polish scholarly literature as the platform of the Archaeological Commission of the Friends of the Sciences Society in Poznań, with Dr. Józef Kostrzewski as its editor. In issues 1 and 2 from 1919, the Editorial Office informed its readers that the purpose of the as yet non-periodical journal was to restore, after a hiatus of nearly 30 years, Poznań’s archeological journal Zapiski Archeologiczne Poznańskie, as well as to channel and stimulate interest in archaeological research. Thereafter, the author of this statement of purpose (and it is not difficult to guess that it was Dr. Kostrzewski himself) wrote that in the new journal the Editorial Board intended to include not only ‘the prehistory of our own province, but to cover – if possible – the whole of Poland’. The journal was therefore to contain ‘In addition to reports from the archaeological efforts of the Commission’ also papers presented at its meetings, as well as ‘works and materials on the prehistory of other Polish provinces’. The editors also expressed the wish that ‘the Review, without losing its scientific character, also be understandable for broader milieux of the intelligentsia, whom the Review encourages to cooperate with us [...]’. The name of our birthday boy – Przegląd Archeologiczny – had its predecessor in Lviv in the 19th century. There, on April 20, 1876, the first volume entitled Przegląd Archeologiczny appeared as the organ of the National Archaeological Society in Lviv, and from 1882 it also became the publication of the Imperial-Royal Conservator of Monuments. However, the late 1880s saw the demise of the Archaeological Society, including its publishing activities. The editors of the new, Poznań-based journal Przegląd Archeologiczny, created a century ago, in fact did not refer to the Lviv tradition. Being most closely connected to their own region, Greater Poland, they declared the intention to fill the vacuum created after the suspension of the publication Zapiski Archeologiczne Poznańskie. The year 1919 ushered in a completely transformed political situation in Europe, one shaped above all by the end of World War I and Poland’s recovery of statehood. This fact is reflected in the Editorial Office’s declaration that Przegląd Archeologiczny was not to be only a regional archaeological journal, but one that served the entire newly independent country. However, various of Poland’s further fates, mainly regarding the re-organization of science in the period after World War II, meant that Przegląd Archeologiczny from 1973 and volume 21 became a platform of the Institute of the History of Material Culture of the Polish Academy of Sciences (today the Institute of Archaeology and Ethnology of the Polish Academy of Sciences). This happened after the death of its longtime editor, Professor Józef Kostrzewski, an outstanding scientist and archaeologist who contributed richly to Polish archaeology, including in establishing the profile of the journal Przegląd  Archeologiczny he edited. Thus, from 1973, our journal became an annually published one, and now, in 2019, celebrates its 100th anniversary with volume 67. Following the change from volume 21 in 1973, the new editor was Prof. dr hab. Tadeusz Wiślański, and after his untimely death, starting with volume 39 in 1992, that office fell to author of this jubilee note, Prof. dr hab. Bogusław Gediga. From the moment Przegląd Archeologiczny became the journal of the Institute of the Polish Academy of Sciences, the editors have pursued the course laid down by Professor J. Kostrzewski. Therefore, issues developed within Polish archaeology predominate in the publications of our journal, but they are usually presented in a broader European context. Recently, articles pertaining to European and sporadically also to non-European archaeology, have been appearing more frequently, the authors or coauthors of which are foreign researchers. In recent years, foreign researchers have also been members of the Editorial Committee and authors of editorial reviews – and considering the frequent publication of articles from disciplines outside, but related to archaeology, among them have been reviewers from other fields of science. Thus, Przegląd Archeologiczny has become an archaeological journal of European-wide standing. Reflecting this is the fact that our journal is indexed in such major bibliometric databases as: ERICH PLUS – European Reference Index for the Humanities and Social Sciences, SCOPUS, CEJSH – The Central European Journal of Social Sciences and Humanities, and ICI – Index Copernicus International. Care for the high scientific level of Przegląd Archeologiczny is primarily to the credit of the authors, but also to the honorable reviewers, members of the Editorial Committee, and of course to the Editorial Board. These groups therefore deserve expressions of gratitude not only on the occasion of the Jubilee. Years ago in 1999, in our 47th volume commemorating the 80th anniversary of Przegląd Archeologiczny, Prof. dr hab. Witold Hensel described the ideas guiding the journal’s Editorial Board and concluded by saying: “In this anniversary year we wish our journal’s editors every success in continuing to ensure that the Review’s ideals be served, and that in twenty years’ time this liber saecularis will go on shouldering the mantle of being the most distinguished and ever more marvelous propagator of Polish genius in prehistoric archaeology. May Przegląd Archeologiczny ever contribute to the breathtaking, ongoing blossoming of our field within the ever richer co-operation of all the European countries, and I dare say of all the world”. We are striving to live up to this wish, treating it as a lofty, inspiring goal – and a challenge we shall unflaggingly pursue.

On behalf of the Editorial Board Bogusław Gediga Editor in Chief 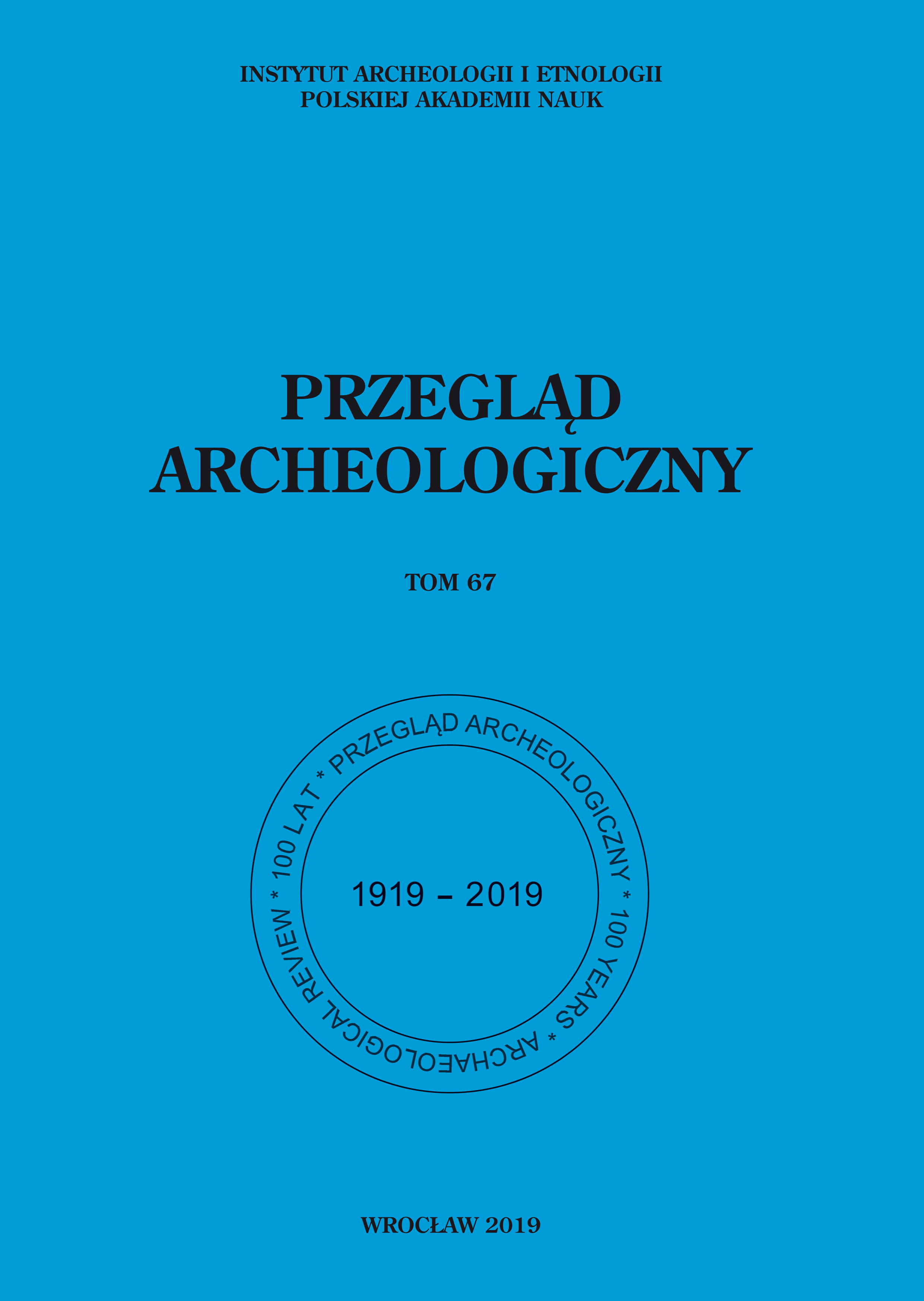